Expertise in the glass industry
since the year 1915

The founder of Kaune Oy, industrialist Herman Anton Nieminen (1888-1963), was originally a metal worker. He was born in Naantali in 1888, got a profession in an artisan school in the years 1904-1908, worked as an ornamental blacksmith in the atelier of the artist Willy Baer in the years 1875-1961, accomplished a journeyman book in 1909 and got the title of master craftsman in 1948.

Nieminen also worked in Nyköping where the energetic metal worker became familiar with the glass industry in Aktiebolaget Konstglas. After working for a while in Berlin, he returned to Turku and founded a business called Taidetakomo ja lasittamo Baer & Nieminen with his former employer in 1912. Nieminen continued the operation on his own from 1915 and changed the business name to Kaune. 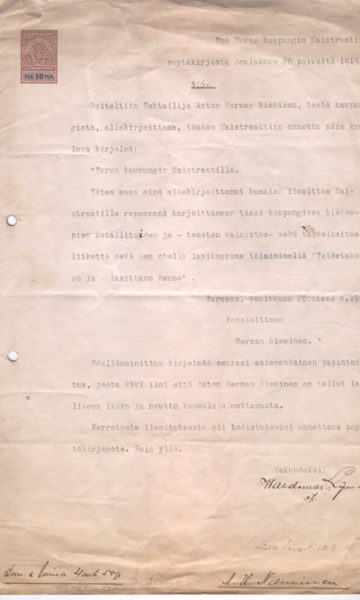 To the city administration of Turku

Hereby I, undersigned, have the honor to inform the city administration that I will engage in the manufacturing of the finest metal works and the art of glazing, and, in addition, set up a glass shop in this town, under the trade name of Taidetakomo ja -lasittamo Kaune 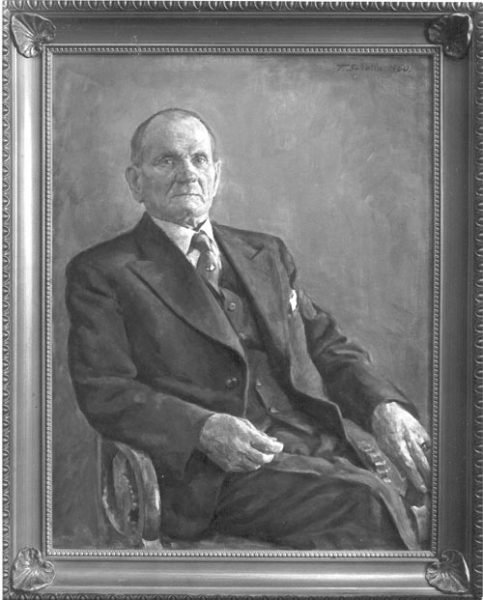 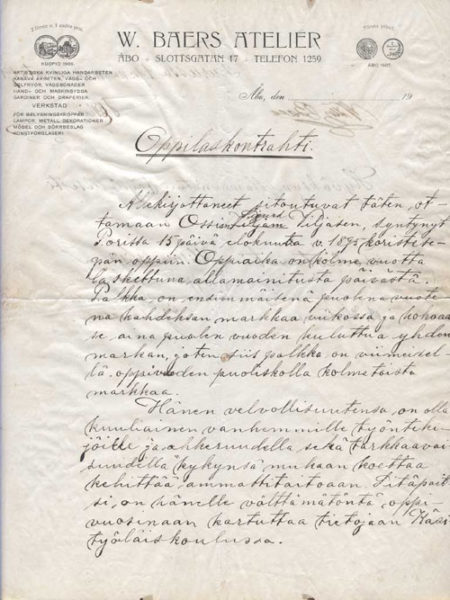 Apprenticeship turns into a 50-year career

A valuable memory of the early phase of the business is the apprenticeship constract that the industrialist Herman Nieminen wrote by hand onto the Baer Atelier’s letter paper when Ossian Viljanen came to be a metal worker’s apprentice in 1912. Master Viljanen then served the business continuously and loyally for over 50 years until he retired in 1965. According to the tradition of the time, the 16-year-old’s mother, with two witnesses present, signed a contract where the boy pledged to be obedient and respectful towards the older coworkers, among other things. 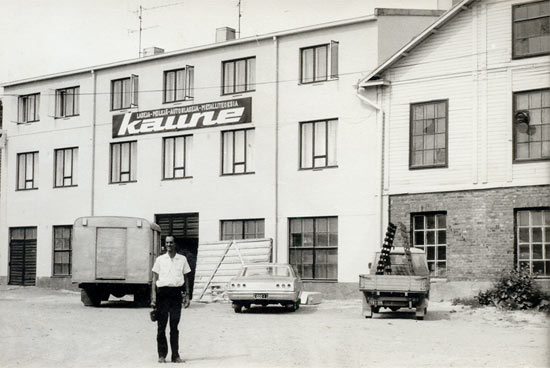 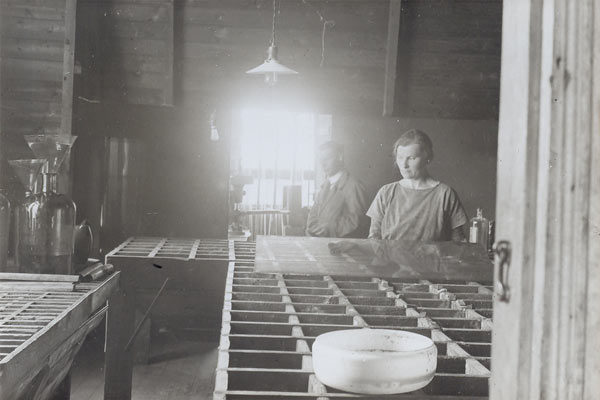 The premises on Köydenpunojankatu in Turku

A two-story premise designed by August Krook was completed in 1919 on Köydenpunojankatu for the limited Kaune Ab at the time.

Expansion phases were completed in four parts, the most significant of which was the three-story premise constructed in 1938.

In the beginning years, the production was focused on metalworks. Artistic forging, embossed and compressed decorative and utility items, mounts, crystal chandeliers and the structures of the light fixtures were made from steel, copper, brass, and lead. In 1920, the industrialist Herman Nieminen brought back the art of mirror-making from his field trip to Germany which then was the primary production service for decades. Kaune’s mirrors were known for their good silver-plating all over the country and they received much recognition over the years.

Glazing and mountings by Kaune in buildings designed by Alvar Aalto

In construction glazing, the first significant and still existing works of Herman Nieminen, are, for example, the beautiful lead glazing of the downstairs area of Hamburg Börs, designed by Willy Baer. In most of the works, Herman Nieminen’s handwritten signature can be seen. Even in banks and in old houses of Turku, the handmade signature of Herman Nieminen can still be found.

Major works of Kaune have also been farmhouses in south-western Finland, the premises of Turun Sanomat, the sanatorium of Paimio and most of the buildings in this area designed by Alvar Aalto like the glazing and mountings of the county hospital at the time. After the war, construction glazing, which had been in decline, was started again by renovating the glass ceiling of the museum of Turku in 1963. Since the 1970s, construction glazing has been an important sector for the business. Kaune has done glazing as a subcontractor for most construction businesses in Turku. Iron structures have also been made – all the way to elevator doors.

A family business for centuries

The sons of Herman Nieminen, Auvo and Heljo, were already working at the factory on their days off from school. Herman was known as an active, thorough and stingy man so discipline was tight and hard work was appreciated.

After the wars, Auvo Nieminen graduated from technical school in 1945 and due to his good certification, he got a job in Oy Laivateollisuus Ab. There was large-scale shipbuilding going due to the war reparations at the dockyard. It is during this time that Auvo Nieminen formed a relationship with the shipbuilding industry, which led to Kaune delivering the glazing and metal interior works for the war reparation ships. 50 ships were built and since then ship interior works have become a significant part of our business. 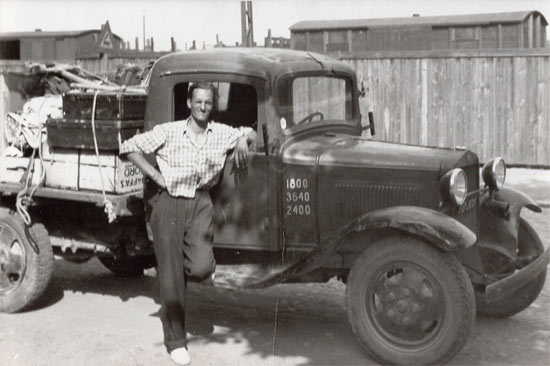 Heljo Nieminen continued to learn by his father’s side. He was spirited and inventive, but he adapted to cooperation with his father. He developed into an expert in the glass industry and looked for additional training in, for example, Sweden. He worked as a glazing master teacher in a Swedish labor union congress in 1954-1956.

When the industrialist Herman Nieminen passed away in 1963 after just having turned 75 a few months before, Heljo Nieminen became the CEO of the business.

Herman Nieminen’s time as CEO of the business was a time of skillful manual labour and growth: the business already had around thirty employees at the time. In Heljo Nieminen’s time, production was automatized and mechanized and the roles and tasks of the employees were significantly changed. Heljo Nieminen familiarized himself with the development of the glass industry and top production facilities in Italy, England, Belgium, Germany, and the USA among others, and often brought with him new methods and ideas and he always respected traditions and manual skills. Thanks to him, Kaune still uses several old tools and machinery like the grinding cylinder that was acquired in 1925. Its huge 1,5-meter long whetstone is still perfectly functional but has been put to rest and replaced by modern grindery. 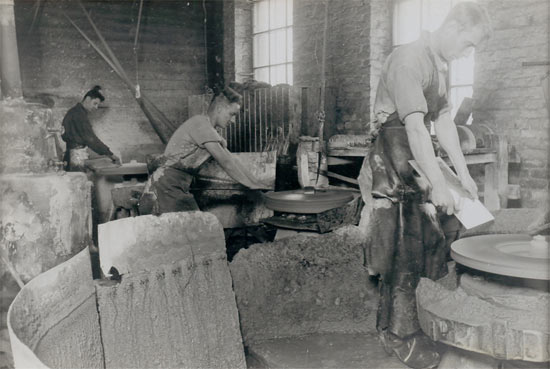 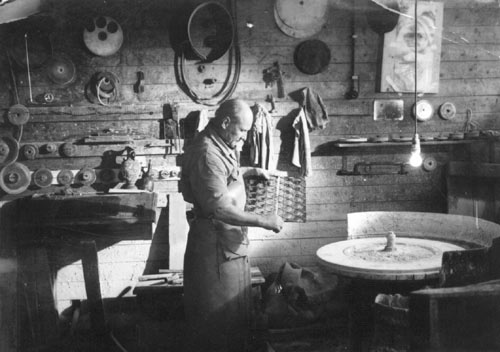 After the sudden death of Heljo Herman Nieminen, his oldest son Karl Erik Nieminen took his place as CEO in 1976. During Karl Erik Nieminen’s time as CEO, Kaune fortified its position as a competent and skilled supplier in the markets of shipbuilding, house construction, and small customer industry.

Karl Erik Nieminen continued as a CEO until 1994, after which Heikki Nieminen stepped into the role – the youngest of the siblings. During Heikki Nieminen’s time as CEO, Kaune invested significantly in the shipbuilding industry. Kaune Oy’s first fire safety doors and glass structures were certified in 1996.

From the year 1996, Herman Nieminen’s granddaughter Anita Saksi has continued to run Kaune Oy with her husband Harri Saksi.

In 2008, the company moved its operation to Naantali in the Luolala industry area. The move to a new, 3000m² production space allowed for better, modern machine tools and improving the production methods when working with glass, stone, and aluminum.

ASK MORE ABOUT OUR SERVICES »